Just in case you missed it, here is a summary transcript of Louise Cheeseman’s interview in David Burns’ Hotseat on BBC Radio Humberside this morning… 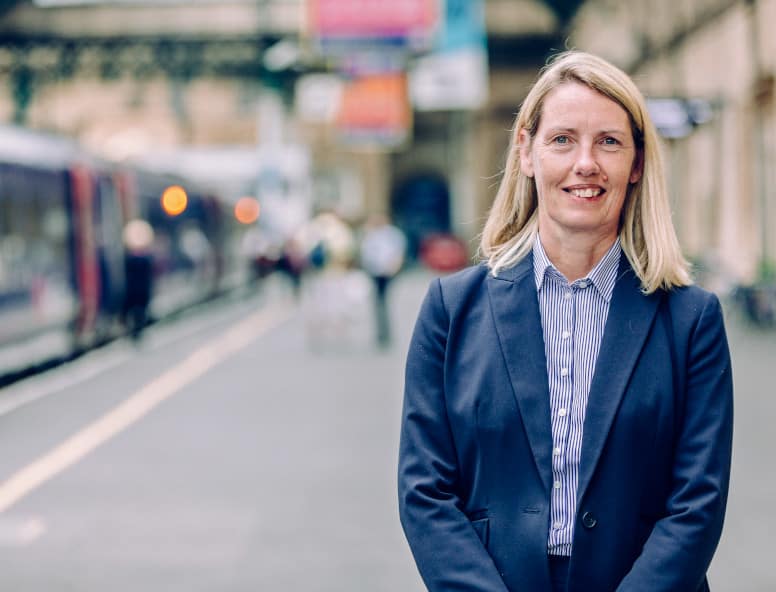 Hull Trains will  become the "best train operating company in the UK" once again - according to its Managing Director.

Louise Cheeseman made the promise during a phone-in on BBC Radio Humberside - when she gave passengers the opportunity to speak to her direct.

For over an hour Louise spoke openly and honestly with listeners during the David Burns show, live from Queen's Gardens on Friday morning (08 March 2019).

Following the disruption to services late last year, Louise spoke at length about exactly what is being done to get everything back on track. She revealed information about the new £60m Hitachi trains due to arrive later this year and told passengers the best way to book the cheapest tickets.

Louise acknowledged 2018 was a difficult year for the firm, but stressed the company is in a "much better position" than it was this time last year, and urged people to put their trust back into Hull Trains and its dedicated team.

It comes as a base model of the firms new Class 802 trains arrived in Hull Paragon Station for the day on Friday - to give passengers the opportunity to have a sneak peek at what they can expect when the new trains arrive later this year.

"I can understand why some people might have fallen out of love with Hull Trains, " Louise said.

"But I would say give us a chance, we are in a better place than we were last year and our staff are working so hard to give people a better service.

"We have had a good Christmas, and an excellent six weeks where we have cancelled very few services.

"We have now got an additional High Speed Train (HST) sat in the sidings, that we can use. We are doing everything in our power to make it the best service.

"I am very confident 2019 will be a much better year for Hull Trains. I'm anticipating we will be the best train operating company in the UK come November when we start introducing our new trains.

"We will have £60m of trains sat in the station for the people of Hull and those who travel down the line.” 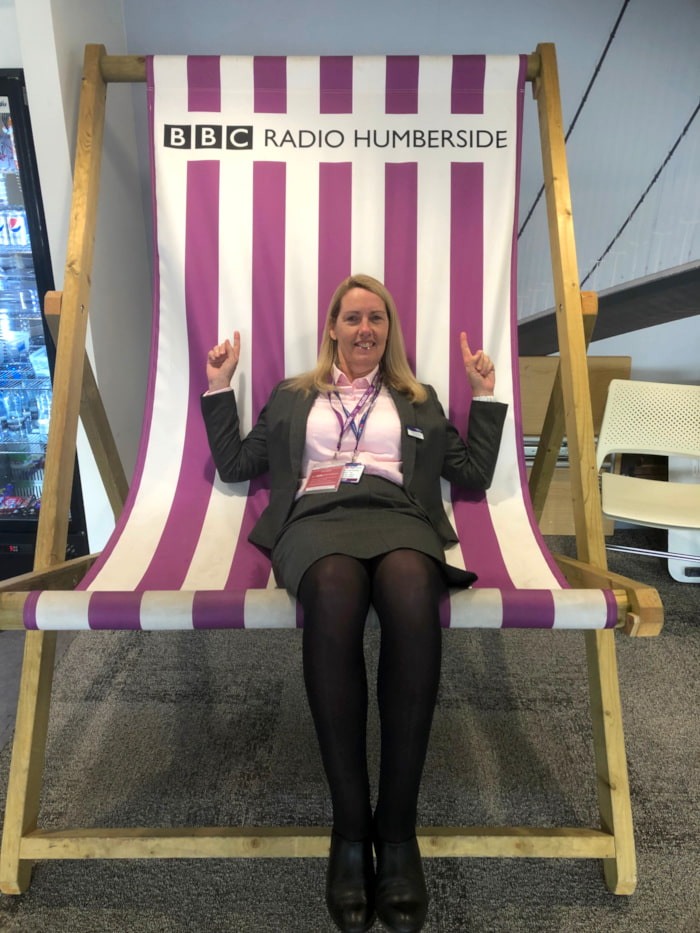 Talking to the media

Burnsy commented on the fact that no-one from the company had made themselves available for media interviews when there were delays to the service last year.

Louise told listeners her time was much-better spent dedicated to resolving the problems.

She said: "I've heard this criticism a few times, but we are a very small company, an open access operator, not a public company and my priority had to be to get the business where it had to be and it takes a lot of effort and my priorities were to be back at base, to be with my team.

"We felt the 100 press statements we answered were enough. If I'd attended every press request - I'd have spent around two weeks in press briefings and my time was better spent addressing the issues that the company was experiencing.

"We recognised that there were a lot of questions that were regularly asked and so I did some podcasts to try and address the most frequently asked questions – we responded quickly as well via Twitter and I’d pick up the phone and ring customers direct too."

Burnsy seemed confused over when the new trains will come into service. Louise confirmed they will be phased in from November, with all five trains on the timetable by the end of December. She said the new trains were built in Japan and are now in Italy having their interiors installed.

She said: "We are taking delivery of five new trains, we currently have four Class 180 trains, plus the HST.

"The fifth train arrives at the end of November, and all the trains will be in service by the end of December. We will still have some Class 180s running until the fifth new train is in service."

Louise said in the future, journey times could be cut, thanks to the new trains, but that initially they will stay the same.

She said: "The journey time will be the same. These trains are able to do 140mph an hour but due to the line speed we can't make them any faster at the current time. This may change in the future."

Louise also revealed there could be an opportunity for passengers to name its new trains.

She said: "Yes, this is something that we are looking at, we are giving it some thought and thinking about how we can do this."

She also said the new arrival of the new trains would create more jobs in the business.


Keeping on track in the meantime

Hull Trains recently loaned an HST from GWR to be used whilst the firm awaits its new trains.

Asked why it took "so long" to get a replacement loan HST train, Louise said: "There are very few trains out there, the new trains are starting to come though now and so we were to take a train from another operator but up until that point First Group were trying to find a train for us.

"It isn't that simple to just bring a train in, plus you have to train the drivers on it. It really isn’t as straightforward as it seems."

Asked if the new HST train has been used yet, Louise said: "Yes, ironically on day one, if we hadn't used it we would have had to cancel services so it has been worth its weight in gold already."

Louise was pressed on the cost implications to the business when services were disrupted last year.

She said: "It was significant but at the end of the day we have to get our customers to London so we will pay it.

Asked if she thought she should personally leave when things got tough last year, Louise said she is committed to the company.

She said: "I am very proud to lead this business and when I took it over at the end of February I inherited some huge challenges. I took over on the same day as the Beast from the East hit, but I thrive on a challenge and the motivator to me is giving people what they deserve which is a direct and reliable service from Hull to London."

Louise was asked about the complaints the company received last year. She admitted there were around 70 per cent more complaints last year, but stressed this is why Hull Trains have invested £60m in the business.

She said: "We brought in a number of people to deal with complaints so we could get back to people as quickly as possible.

"We've got a new website as well which is a massive improvement, I'd ask people to use our website so we have people's details and so we can deal with it much more quickly.

"Due to extra staff, people should now get a response within two days."

David e-mailed the show to ask if more trains could be added to the timetable at peak times.

Louise said: "If you think about the railway infrastructure, it's a bit like M25, there's little spare capacity left, we would love to run more but unfortunately it's just not possible during peak times."

Louise admitted the rail industry is a complicated one.

She said: "Anyone who joins it will be blown away by the complexity of it, it's like a different language.

"It is so complex and the ticketing system is so complex, but the William's review is going on at the moment and we'll be interested to see the outcome of that.

A listener called Ian rang the show to ask: "Why is it that all the other companies will take each other’s tickets, but they will not take Hull Trains' tickets?"

Louise said: "This doesn't just apply to Hull Trains. You can buy an open ticket which would allow you to travel on any train, but if you want the cheapest ticket and have bought a Hull Trains ticket, that is the ticket you have to utilise.

"If there's a delay on the day we will make arrangements with other operators."

She was also asked if Hull Trains put the prices up when there are strikes on other services, which she categorically denied.


How to get the cheapest tickets

She said: "Our tickets open 12 weeks before, so if you know 12 weeks before departure, I'd direct you to our website. We look at the cheapest prices being between £18 and £20 for a single journey to London.

"It's very competitive. You can get these on the phone too, if you can't get online. Our customer services team will be happy to help."

Louise was asked about a career in driving trains. She said: "It's a great career.

"We do try to recruit from within the business and across the region. There are a lot of female train drivers at Hull Trains who have started out as on-board hosts and worked their way up.

"We are about to recruit more on-board hosts, it's a great opportunity to join a wonderful family of hard-working people and it would give you a wonderful career.

One listener asked why the engine is kept on when the trains are in the stations.

Louise said: "It’s a good observation, the main reason it to make sure that everything is working in readiness for the next day’s journeys – including the electrics.

"This will change when we get our new trains."

Louise confirmed there are no updates on the question of electrifying the track between Selby and Hull, but confirmed the company is keen for it to happen.

Who is Louise Cheeseman?

Louise is the only female Managing Director of a rail company in the UK. She told listeners she began her career in rail in 2001 as a conductor and over the years has carried out a number of managerial roles, and has worked in Sydney, Dubai, London and Manchester and has returned to her home city of Hull.

"I am so proud of Hull Trains, she said. There are no other train companies in the UK named after their city."