Update: We will start running services again from Monday, April 12th. Tickets will go on sale shortly, details to follow. In the meantime our services will remain suspended.

Update: We will start running services again from Monday, April 12th. Tickets will go on sale shortly, details to follow. In the meantime our services will remain suspended.

Members of the Royal British Legion have raised more than £5,000 towards helping families of veterans during poppy appeals on Hull Trains' services.

The Bridlington Branch of the Royal British Legion travelled on services between Hull and King’s Cross, raising funds both on board and at the train stations, in the two weeks prior to Armistice Day on Sunday 11th November.

The members, who also travelled on Northern Rail and LNER services, raised £5,400 in total, which will be donated to veterans who served in Britain’s armed forces, and the families of those who have been lost in conflict. 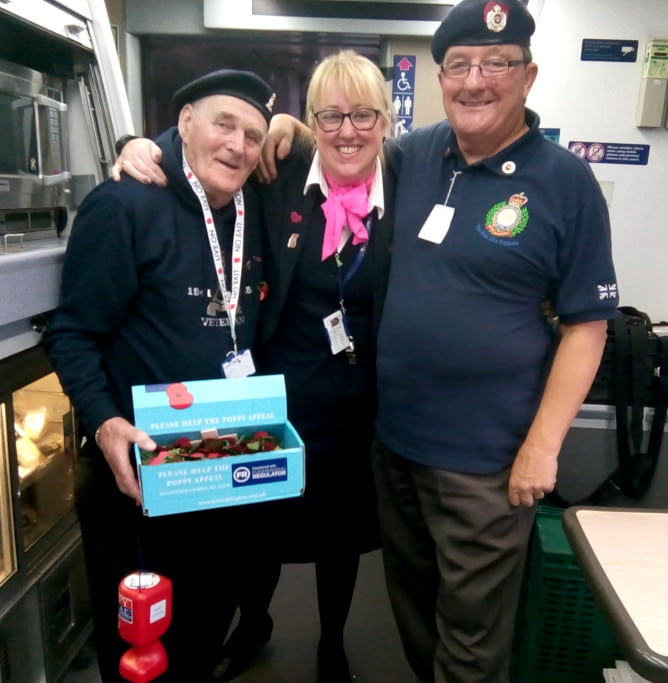 Denis Scaife, from the Royal British Legion, said: “I’d to like thank to Hull Trains and all its staff for allowing us to travel on its rail services during the Poppy Appeal.

“The crews, including some drivers I met, were hugely accommodating and friendly. We have been treated with great courtesy and friendliness on board your service.

“The money raised from our Poppy Appeal will go a long way towards helping our veterans and their families in their hour of need. Sadly, some did not return from conflicts. However, they left behind families, wives and children who still need our help. Thanks to everyone who donated this year and we look forward to repeating our expedition with Hull Trains next year.”

“Armistice Day is a very important day for the country, we have also allowed military veterans to travel for free on the day to visit London and pay their respects.

Susie added: “We’d like to congratulate the members of the Royal British Legion who travelled on our services for their hard work in raising these funds.”

During World War I, 186,475 railway workers served under arms, and during which nearly 19,000 lost their lives.

Hull Trains set to Build Business Back up

Hull Trains Managing Director set to Build Business Back up