‘Between the Badges’: The incredible journey of Hull Trains’ Managing Director captured in single a picture

When Hull Trains’ new managing director was tidying through some of her drawers at the weekend, she found one of her old name badges from 2005. While there’s nothing especially significant about that, when put next to her current name badge it clearly illustrates an incredible journey over the 13 years…‘between the badges’.

The badge Louise Cheeseman unearthed was from her time at Northern Rail, where she started her career as a train conductor. She made quick progress, becoming general manager for Docklands Light Railway, which included responsibility for managing operations for the 2012 Olympic and Paralympic Games. 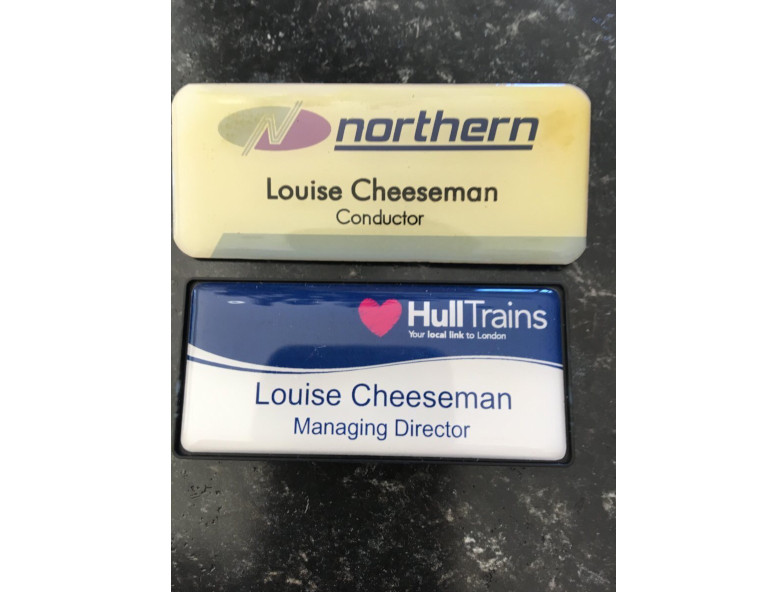 Commenting, Hull-born Louise said: “I felt extremely privileged to receive my new badge from Hull Trains last week, following my formal appointment as managing director a few weeks earlier. I have been working as interim managing director since March, and was delighted that the permanent position was confirmed last month.

“My new badge signals an exciting new phase in my career at the helm of Hull Trains. It’s been an exciting journey – one that hopefully still has a long way to go!”

Following a difficult start in her temporary capacity as MD - after three of the company’s trains were severely damaged during February’s ‘Beast from the East’ - Louise and the team at Hull Trains have been working around the clock to get things back on track. And this work is certainly paying dividends following month-by-month improvements with 96% of the company’s timetabled services normally in June 2018.

Louise said: “It has been a very difficult first six months to the year, but I am surrounded by passionate people who all love Hull Trains and I am pleased with the progress we have made so far. Whilst there is still much more to do, I would reassure everyone that we are working tirelessly to deliver the award-winning service that our customers have become accustomed to.”

An equal opportunities employer, Hull Trains’ workforce is roughly 50% men and 50% women. A third of the company’s train drivers are women – the highest ratio on Britain’s railways. The organisation is also the only train operating company in the UK to have a woman at the helm.

Hull Trains has invested £60m in new trains which will come into service in 2019 - delivering some of the most technologically advanced, fastest and most comfortable trains in the UK.